I'm hopelessly behind on reviewing the books that I've read, so here's my attempt at getting back on track.

The first book that I finished this year was Snow Like Ashes, so that might be a good place to start. 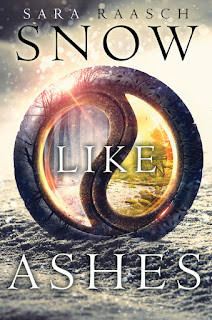 
Author: Sara Raasch
Genre: YA, fantasy
Format: Paperback
*Story:
Imagine being on the run for 16 years because your kingdom was conquered. Meira is one of only eight survivors who managed to escape. The others were taken captive and are used as slaves.

*Characters:
-Meira: She is one of the eight survivors who got away after the Winter kingdom was conquered. She is an orphan. Meira wants nothing more than to join the other survivors when they go on missions to get Winter's conduit back. She's in love with her childhood friend and future king Mather. Like all inhabitants of Winter, she has vibrant white hair, which intrigued me very much.

-Mather: He is the future king of the Winter kingdom. He's trained as a warrior, but he's also being prepared to become king. He's in love with Meira, but they both know there might never be anything more between them.

-William / Sir: He is the leader of the survivors. He's a very strict leader, who doesn't usually show his emotions.
-Angra: Evil Spring ruler who has enslaved the Winterians.

-Noam: He is the king of Cordell, one of the Rhythms. Sir asks Noam for help to get Winter back.

The magic system consists of conduits that are used by each country's monarch. The conduit allows the monarch to 'channel' their magic. Each monarch uses their magic for different purposes. In this story the survivors are trying to find the two halves of Winter's locket, so they can put them back together and claim Winter's throne again and free the Winterian slaves.

*Overall rating:
I really liked this book. I especially enjoyed the way Primoria is divided and the way the magic is wielded.

I enjoyed the worldbuilding, you really get to see how people are affected by being in their own kingdom or in another kingdom with a different type of weather. I found the difference between the Seasons and the Rhythms very refreshing.

!!!!Spoiler!!!!
The love triangle is maybe a bit tropy, but I still felt sorry for Mather when Meira was promised to Theron to secure the help of Cordell.

The pacing of the story was good, for me there weren't any dull moments. Even though I don't really like politics in a story, in this book I didn't really mind it because even though it is important to the story, it isn't overwhelming or confusing.

I gave this book 4.5 stars on Goodreads.

Have you read this book? If so, what did you think of it? Let me know in the comments.

Posted by Liss' Little Bookcorner at 23:00 No comments:

This is what I read in March and April.


As you can see, April has been a very good reading month, but this is mostly thanks to the two week Easter break at the end of March and the beginning of April and the fact that I've read a couple of novella's.

My favourite books (per genre) of these two past months are:

* Fantasy: Siege and Storm by Leigh Bardugo. I loved all the books in the trilogy, but the second one is my absolute favourite.

* YA Contemporary: Nowhere But Here by Katie McGarry. Katie is one of my autobuy authors and she hasn't disappointed me so far.

* NA Contemporary: Clipped Wings and Inked Armor by Helena Hunting. I really liked that this has such a raw edge to it.

What have you liked reading during the month of April?