This is my review for Champion, the third book in the Legend trilogy by Marie Lu.
This will contain spoilers for Legend and Prodigy (click on the titles to read my non-spoiler review). 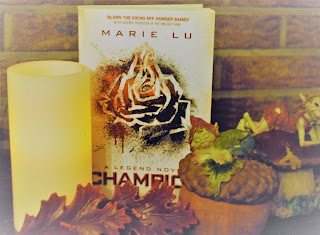 *Story:
In this conclusion we follow June, Day and Anden in their battle against the Colonies.
*Characters:
-June: I liked her better in this book because although a lot of things happened to her that could have brought her down, she held her head high as best as she could. She isn't whiny like she was in the previous book.
-Day: His character also goes through a lot of changes and character development. I liked how he kept putting others above himself even though he knew he was dying.
-Anden: Even though he's starting to look more like his father as a politician, he is still very much a young man bearing way too much responsibility.
-Eden: I really liked Eden, he is such a fighter, despite everything he's been through.

*Plot/world building/overall rating:
I really liked the worldbuilding in this one: the contrast between the Republic of America and Antarctica was well explained. I also enjoyed that we got to see how the facade the Republic has put up is nothing more than that: a facade.
Even though the epiloque left me wanting I still gave this book 4.5 stars. This book was a lot more emotional than the previous two. It was also even more action-packed and fast-paced.
SPOILER:
My heart was trampled on when Day didn't recognise June and she decided to let him go.

Overall I really loved this trilogy and I really want to get Marie Lu's The Young Elites trilogy.

Have you read either of these trilogies? What did you think of them?

Let me know in the comments.

Annelies
Posted by Liss' Little Bookcorner at 22:29 No comments:

After finishing and really enjoying Legend (click on the title to read my non-spoiler review), I decided to pick up Prodigy and Champion from Fnac when they were having a 'buy 3 books, pay for 2' sale - the third book was Passenger. (I read this book in October 2016, I know, I'm so behind on posting reviews :-$)

Beware this will contain spoilers for Legend. 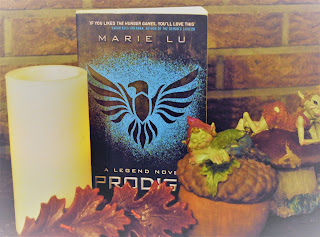 *Story:
The story of Prodigy picks up where Legend left off. June helped Day escape and now they are on their way to meet up with the Patriots. We follow their journey to the Patriots and everything that happens when and after they find them.

*Characters:
-Day: I liked Day even more in this story, he seems so much more human. He goes through a lot of changes and he even needs to start trusting people he always considered to be enemies.

-June: Opposite to Day, I liked June a bit less in this book. To me, she seemed, not really whiny, but still not the strong girl she was in Legend. True, she has to sacrifice a lot, but still.

-Tess: I liked that we got to see more of Tess in this book. I thought she was a very strong character. Day still feels the need to protect her, even though she is more than capable of taking care of herself.
SPOILER:
I really felt for her when her feelings for Day remained unrequited.

-Kaede: Another character I was glad to see more of. I like how honest she is in admitting that at first she worked with the Patriots just for the money.

-Razor: I never quite fathomed that character.

-Anden: He is the new Elector who came to power after the death of his father. He is a figure rising to power, struggling to be different from his father, but most of all he's a young man dealing with a whole lot of emotions.

*Plot/worldbuilding/overall rating:
Because the story doesn't solely take place in the Republic, it was nice to see the worldbuilding of the Colonies and the underground tunnels too.
I enjoyed this book, but it's wasn't until the last part that it really grabbed my attention and it became a 4 star read.
SPOILER:
One thing I didn't like was the love triangle or even the love square. This has become so cliché and I know it's part of the story, but I still didn't like it. That's why I was leaning towards 3.5 stars. The square becomes a triangle again when Tess decides to stay with the Patriots.
What really got to me was how in the end Day discovers that he is dying. When he says goodbye to June, my heart got ripped out of my chest.

Because of the cliffhanger ending I was really, really happy that I could immediately pick up Champion.

Have you read this book? Did you like/dislike it?

Annelies
Posted by Liss' Little Bookcorner at 22:22 No comments:

Today I'm going to review a book I've actually only recently finished :-) *pats herself on the back*: Winter by Marissa Meyer. I read this for the March theme of the #OWBookclub on Goodreads: retellings.

Winter is the conclusion to the Lunar Chronicles - I know, there's also Stars Above, but that's a collection of short stories. Beware this will contain spoilers for Cinder, Scarlet and Cress (click on the names to read my non-spoiler reviews.)
Title: Winter
Author: Marissa Meyer
Genre: YA, sci-fi, fairy-tale retelling
Format: paperback 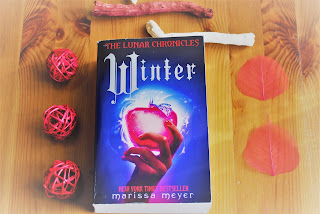 *Story:
At the beginning of the story we find ourselves aboard the Rampion where Emporer Kai is still being 'kidnapped'. We folow the gang trying to stop Levana from becoming Empress of Earth and even stop her reign altogether so Cinder - Princess Selene - can take her rightful place on the throne. They also try to rescue Scarlet and save Winter from the clutches of her evil stepmother.
*Characters:
-Cinder: She really comes into her own in this story. She has grown so much mentally and she is really ready to take her place on the throne. Although I do have to admit that at times I thought her 'rallying of the troops' went a bit too easily. I really liked how her struggle not to become like her aunt was portrayed.
-Kai: Again he finds himself torn between his love for Cinder and his need to obtain the Letumoses antidote. I loved how he stood up to Levana and didn't even hide how proud he was of Cinder.

-Scarlet: I loved how resilliant and strong she was throughout this story despite everything that happened to her.
SPOILER:
I also loved how she wasn't scared of the changes Wolf had been put through by Levana. She just continued to see the man he used to be, not his current exterior.
-Wolf: He is still one of my favourite characters. I liked how we got to know more about his past and his family. I found him to be incredibly strong, especially mentally.
SPOILER:
He doesn't succumb to the physical and mental changes that were done to him. I love how he still remains so shy, careful and even a little clumsy around Scarlet.
-Cress: I remember thinking in the previous book that she was a bit naive and whiny, but she really comes into her own in this story. She really goes from this shy, insecure girl from the sattelite to playing an important part in the revolution.

-Thorne: There were times I wanted to strangle him SPOILER: I know he was being glamoured when he kissed that Lunar, but still!!, but I liked how we get to see his softer side and his feelings for Cress.

-Winter: She is such an whimsical girl, although she has a great sense of humour as well. I loved her teasing Jacin and the way she cared for her wolf and Scarlet.

-Jacin: He is such a sweet guy whilst always remaining the loyal guard.
*Plot/worldbuilding/overall rating:
I found this to be a very good conclusion to the series even though I wanted there to be more emphasis on Winter and Jacin. I know there has to be a lot of emphasis on the revolution and Cinder overthrowing Levana, but some more of Winter's story would have been nice.
SPOILER:
Theirs was the relationship I found the least satisfying, because you don't really know where they will go from here.
I really enjoyed that we got to see more of Luna; the working sectors and the outside of the domes. I also liked that we got see how the Lunars percieved Earth.
*Physical book / audiobook:
At first I only read the physical book but I didn't have that much time to read for longer periods on end. So I decided to get the audiobook from audible and I really enjoyed it. The narrator did all the voices really well. Listening to the audiobook also helped speed up my reading.
Even though it's bittersweet because it concludes a great series, I'm still very happy that I finally tackled this monster of a book.

I'm not going to read Stars Above right away, I think I'm going to spread it out and read one story at a time.

Have you read this book or the series? Let me know in the comments what you think of it.

Annelies
Posted by Liss' Little Bookcorner at 00:27 No comments:

Continuing with my reviews of the Lunar Chronicles, today I'll be reviewing Fairest, book 3.5 in the series. Because this is a novella, this review will be rather short.
Title: Fairest
Author: Marissa Meyer
Genre: YA, sci-fi, fairy-tale retelling
Format: paperback 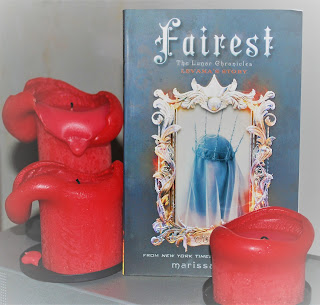 *Story:
This is the story of how queen Levana came to be the evil person that we know from the other books in the series. We get to see Levana from her childhood through her teenage years and early adulthood.

*Plot/overall rating:
I went into this book not expecting to like Levana better/more afterwards and I didn't by the end of the book. I did, however, understand better why she is such a bitch, but that didn't make me sympathise with her. On the contrary, I disliked her even more. Granted, she hasn't had an easy childhood and her sister Channery is so cruel to her, but that doesn't justify the things Levana has done.
SPOILERS:
I can't believe how she manipulated her husband into loving her and then in the end killing him because of her plans to rule Earth. The way she held him prisoner for ten years, not even giving him time to mourn the loss of his wife is just so cruel.
The way she planned to kill princess Selene so she could be the true queen of Luna and she thinks she's being merciful by letting Selene die - something Channery didn't do for her - is so twisted.

Is this a necessary read: not really, but it does give you a great insight into Levana's character. It didn't make me sympathize with her, on the contrary, it made me hate her even more. This, to me is testament of the great and wonderful writing style of Marissa Meyer. 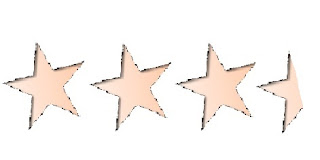 Have you read this novella? What did you think of it?
Bye for now
Annelies
Posted by Liss' Little Bookcorner at 22:14 No comments:

Last month (March 2017) Fairyloot celebrated their 1 year anniversary and I managed to order their special purple box. The March theme was Myths and Monsters. 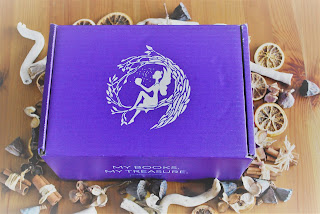 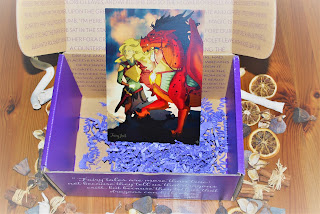 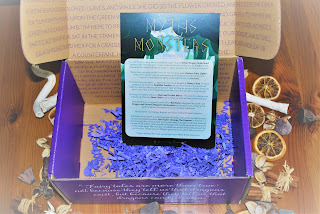 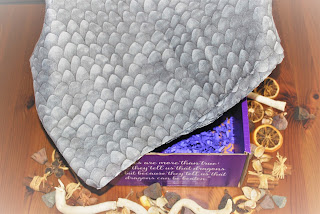 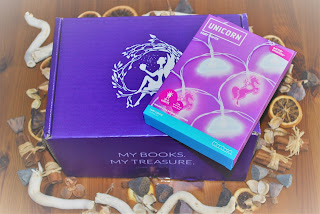 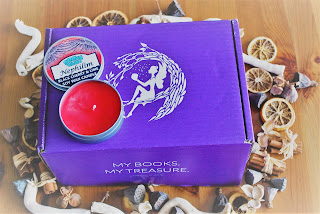 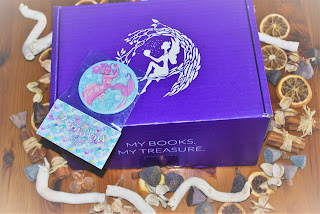 A dragon and phoenix magnetic bookmark - these are adorable 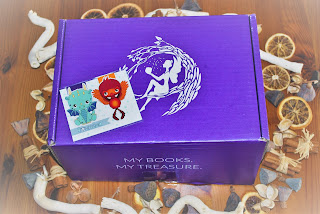 Fairyscoop and an anniversary Fairyloot booklet 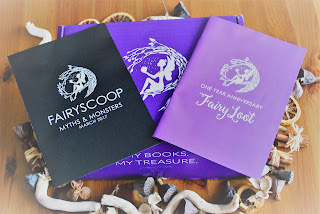 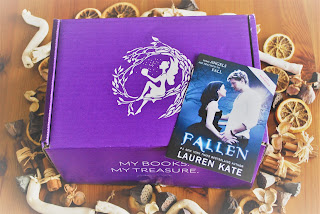 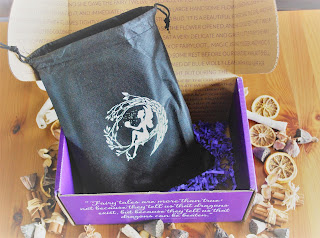 Strange The Dreamer by Laini Taylor 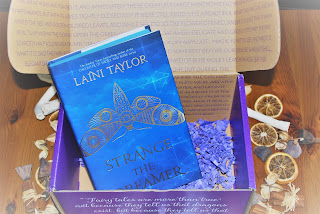 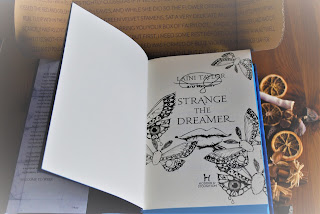 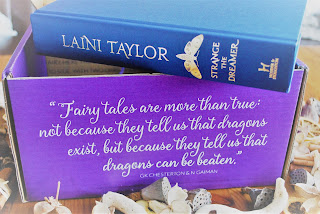 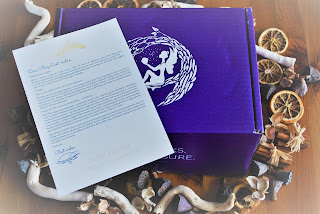 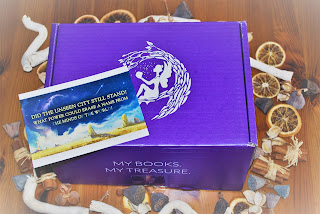 I am really happy with the contents of this box and I'm very excited to read Strange The Dreamer (and the book looks stunning).

Unfortunately, I was too late to order the March box, but I subscribed for the May box (the theme is Warriors and Legends) today, so I have something to look forward to :-)

Annelies
Posted by Liss' Little Bookcorner at 21:44 No comments: