Last year I didn't know about the O.W.L.s readathon until it was over, so I'm very happy that now I've heard about it on time. This readathon is hosted by Book Roast. You can find her announcement video here. The readathon takes place during the month of April.

G has really put a lot of time and effort in creating this readathon and I'm so happy to be taking part in it.

'O.W.L.s' stands for 'Ordinary Wizarding Levels', which are the exams Hogwarts students take in their fifth year.

A new feature this year is that you can 'choose' the O.W.L.'s for a specific career. Of course you can also try to read books for all 12 exams.


Since I probably won't be able to read 12 books in one month, I will be focusing on the O.W.L's required to become a Librarian. If I finish the books for this career, I might 'take other exams' as well.

In August there is the follow-up readathon, which are of course the N.E.W.T's. For this readathon you can only take the exams for the O.W.L.'s you passed.

I'm going to be sharing my TBR for the subjects that I want to focus on and then I'm going to show what other books I might also read.

As always, I'm going to be giving myself a choice of books for each subject, otherwise this won't work.

I actually only have one book for this:
*The Great Hunt by Wendy Higgins. 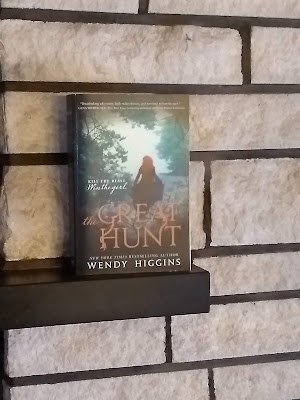 Arithmancy:
Work written by more than one author. 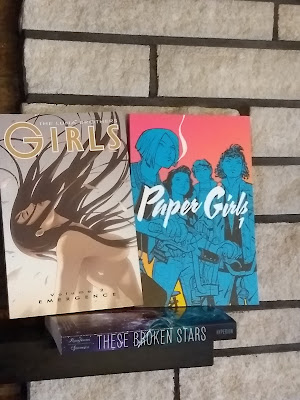 (I know my copy of Girls volume 2 is also in the photo, but that is because this was originally also on my TBR. Only, I have read this for the sequelathon :-D )

Defence Against the Dark Arts:
Reducto: Title starts with an 'r'. 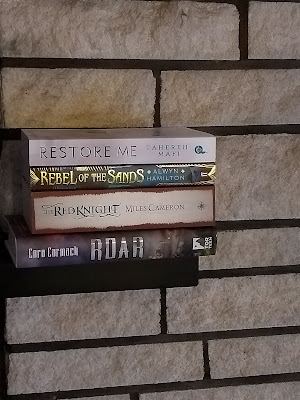 History of Magic:
A book published at least 10 years ago

*The Great Hunt by Robert Jordan
*Northern Lights by Philip Pullman
*Gardens of the Moon by Steven Erikson (which is the one I'm most likely going to pick up because there will be a readalong for this one during April.)
*Priestess of the White by Trudi Canavan
*Ship of Destiny by Robin Hobb 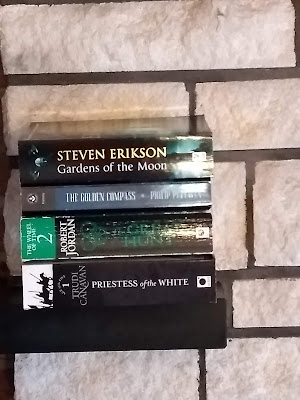 (I know the second book is not the UK edition of Northern Lights, but I have since gotten the UK edition, so it would be that one I'd be reading.)

Transfiguration:
A book with sprayed edges or a red cover 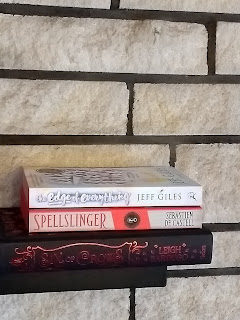 The other subjects are:


Astronomy:
A book with 'star' in the title.

Care of Magical Creatures:
A book with a land animal on the cover.


*Northern Lights - it has a bear on the cover

Divination:
A book set in the future.

*These Broken Stars
*Stars Above
*Defy the Stars
whichever one I don't use for another prompt.

Herbology:
A book with a plant on the cover.

I only have one book with a plant on the cover and I would rather use it for another subject.

*Brieven van Marie (Letters from Marie). This is a companion to the Flemish tv-series 'In Flanders Fields'. (This is the one I could use for herbology as well because there are poppies on the cover.)
*A New Adult book (don't know which one yet)

Potions:
Next ingredient: a sequel.

I'm very excited to start this readathon and I'm also very curious to see if I'll succeed and how many subjects I'll pass.

Will you be taking part in this readathon? If so, what's your TBR? Let me know in the comments.

Even though I'm not a readathon person, I found one I wanted to take part in because it sounds like a low-pressure one: the sequel-a-thon.

This readathon takes place from the 21st 'till the 31st of March.

There are only three prompts, so it's doable :-)

Here's my TBR:
1) Read the sequel you've been putting of the longest: Knight's Shadow by Sebastien de Castell. I read the first one 'Traitor's Blade' back in August and I still haven't read the second one.

2) Continue with a series that you started last year: Ignite Me by Tahereh Mafi or Ship of Destiny by Robin Hobb.

3) Finish a series: Again: either Ship of Destiny or Ignite Me. I know this isn't technically the end of a series, but since this was originally going to be a trilogy I'm counting it as the last book.

There is a bonus prompt, which is to give your TBR a fun name. So, I decided to go with: 'I really want to get these off my TBR so I can start a new series'-TBR.

To be honest, I'm probably only going to concentrate on prompts 2 and 3 and read Ignite Me (you can use the same book for different prompts, yay!). I'm not a fast reader if I can't alternate between reading the physical book and listening to the audiobook, so it might take me a bit longer to finish Ignite Me. I would be happy to just finish this one book, because I might read 'Restore Me' for the OWLs readathon. (I know, I know, I just said that I consider Ignite Me to be the conclusion, but let's just roll with it, shall we?!)

Hopefully I can finish my current read 'Dreams of Gods and Monsters' before Thursday so I can start the readathon then.

Do you marathon books in a series or do you just read one and then take ages to pick up the next book in the series?
Let me know in the comments!

Posted by Liss' Little Bookcorner at 22:15 No comments: