It's high time I did another review for you.


Since starting school again in September I've been using my e-reader a lot more while commuting to and from work and I decided to start the first novella in a series by Bre Faucheux. 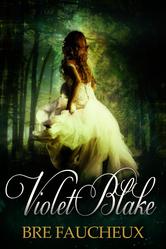 This is the new cover

*Story:
The Resurgence of Violet Blake tells the story of Shawn Cassidy, a girl who descends from a line of healers. She has always known that she is a healer and she has tried to use her abilities whenever she can. This hasn't always been easy, because when she was younger she healed a girl too much too quickly and her mom and dad told her off because she nearly exposed her whole family. Secrecy is an important concept in this story: they have to keep their ability a secret because the world can't know there are healers around. She lives together with her mom and dad - who are both doctors - and her brother Gavin - a paramedic.

We meet Shawn while she is in high school, where she is having a bit of a rough time. Together with her best friend Lucas she tries to get through the (school)days without being overly noticed. But things start to change when the hottest guy in school, Carter, starts noticing her and even asks her out.
From there on the story takes off because a lot of events happen that turn Shawn's world upside down. I'm not going to tell you anything more because that might spoil you for the rest of the story.

*Characters:
- Shawn Cassidy: I instantly liked Shawn because I could kind of relate to her while she is in high school. She is trying to go through the day unnoticed, but when Carter asks her out she gets picked on by his ex-girlfriend. I was never bullied or anything, but because I had my own style, fellow pupils tended to laugh at me from time to time. Shawn's character goes through a lot of changes rather quickly (but not too quickly, the changes are still believeable).

-Shawn's parents: We don't really get to know them in this story. We are told that they work very hard and that there are days that Shawn hardly sees them at all. This means that Shawn and Gavin mostly had to look after themselves.

-Gavin: He's a paramedic. He was supposed to become a doctor just like his parents, but he wanted to rebel a bit, so he became a paramedic. He's a good guy who wants to help people out as much as he can.

-Carter: Shawn has had a crush on him since forever and she can hardly believe it when he starts showing interest in her. We don't really get to know him, just that there is more to him than first meets the eye.

-Lucas: He's Shawn's best (gay) friend and the best friend you can have. He always has her back and always gives her 'advice'.

-Liam: He's a guy working for the CIA who turns out to be someone completely different.

*Plot:
This novella is a set-up for the other novella's in this series. We get to know some characters that are going to play an important part in the rest of the series (which I have already read and absolutely love). This is a very fast-paced story, because a lot things have to happen in a limited number of pages. We don't get much world building, but that didn't bother me because the story takes place in a modern day America and England.

*Overall rating:
First of all: I read a version of this book that still had some spelling/grammatical mistakes. I know that Bre has been very busy revising the stories and she has just released the boxset of the series. Keep in mind she is a self-published author and she has to revise her own work.

I gave this book 3.75 stars on Goodreads. I really liked the story, but as always it took me a while to adjust to the fact that I was reading a novella. On the one hand I think things sometimes move too quickly, but on the other hand I'm always surprised that the book ends when it does. This book made me curious enough to immediately move on to book two in the series.

If you like paranormal stories about healers, then definitely pick this one up.

You can get the box set from Amazon or Kobo
Posted by Liss' Little Bookcorner at 22:11 No comments:

I decided a while ago that I wasn't going to do TBR's anymore, because I don't stick to them anyway. But today I'm going to make an exception:

This is my TBR for the Anti Bullying Week Readathon hosted by the lovely Sarah Churchill (Click on the link to go to her YouTube channel).

This readathon will be held from 16th  - 22nd November.

Last year Sarah hosted the first Anti Bullying Week Readathon and I participated. I ended up reading one book, but it was one that counted: Wonder by R.J. Palacio. It made me even more aware (I am a teacher, so I'm confronted with the problem on a more or less regular bases) that bullying needs to be stopped and that not enough people know/care about it.

So, when Sarah put up her video for this year, I immediately knew I was going to participate again. I looked up the list of suggested books on the Goodreads page and decided that this year I'm going to try and read:

- Eleanor and Park by Rainbow Rowell (technically this will be a reread, but I've been wanting to reread it for a while now, so this will be the perfect opportunity.)

This is a readathon for a good cause and I'm hoping a lot of people will be joining in.
Let me know in the comments if you're planning on joining in and tell me what you'll be reading.

Annelies
Posted by Liss' Little Bookcorner at 21:55 No comments: