The raw emotions in chapter 16 are so different from the joy in chapter 14 (the fete). This was such a fast-paced chapter!

I was totally taken by surprise by Mal's behaviour, whispering right before she falls aslepp that he'll always find her.

And then I finally read the sentence that made me pick up this book in the first place:
'I don't care if you danced naked on the roof of the Little Palace with him. I love you, Alina, even the part of you that loved him.'


I was also surprised that Alina got the scar on her hand from a shard and not from her gift.

Inside the Fold you think that everything is lost, but then everything starts to change and shift.

I really like how strong Alina is, I think she is one of the strongest female protagonists.

I love that the book ended the way it began: the epilogue - here named After - doesn't mention their names, it just talks about a boy and a girl.

Annelies
Posted by Liss' Little Bookcorner at 21:27 No comments:

Email ThisBlogThis!Share to TwitterShare to FacebookShare to Pinterest
Labels: #4, As I read, Leigh Bardugo, Shadow and Bone

What just happened? After what happens between Alina and the Darkling at the fete, this is such a blow to the gut. How can the Darkling be so completely different from what he appears to be???

These thoughts are tumbling around in my head:

* The Darkling is the Black Heretic?????

* Baghra is the Darklings mother?????

* Does he really want to expand the Fold, not destroy it????

I'm very curious to read on, I need to know what happens next!!

P.S. I apologise for all the question marks :-$
Posted by Liss' Little Bookcorner at 21:39 No comments:

Email ThisBlogThis!Share to TwitterShare to FacebookShare to Pinterest
Labels: #3, As I read, Leigh Bardugo, Shadow and Bone

After reading the sixth chapter I was completely taken in by the Darkling! He is so mysterious and dark (sorry, pun not intended) but I'm still not completely sure who or what he is.

Alina is so incredibly sassy, I just love her. She has been through so much in the first 5 chapters, but she still tries to stand her ground. She is a 'realistic' character, especially when it comes to her feeling left out because she can't summon the sun on her own. You really understand why she feels out of place amongst the Grisha. You also feel her struggle about Mal not responding to her letters. It was a great moment when she was finally able to unlock her gift.

I knew something would happen between the Darkling and Elina, but I was still surprised when the Darkling kissed Alina. The attraction may be a bit cliche, but I don't think she can help but be attracted to him.

There are a few side-characters I want to talk about:

* Genya is an interesting character and she has a fascinating ability: being able to change someones appearance/face.

* The Apparat made me cringe every time he made an appearance. Urgh!
* Marie & Nadia are so fake, it's frustrating.

* Zoya: I wonder if we're ever going to find out why she's so vicious to Alina the first time they meet.

* What's up with Mal, why isn't he answering Alina's letters? They've spent their childhood and a big part of their youth together, why is he able to forget her so easily?
I was so happy when he turned up at the Little Palace but their reunion doesn't go as planned. What has happened to him? Is he jealous? Is he in love with Alina?

That's all for now.

Annelies
Posted by Liss' Little Bookcorner at 13:32 No comments:

Email ThisBlogThis!Share to TwitterShare to FacebookShare to Pinterest
Labels: #2, As I read, Leigh Bardugo, Shadow and Bone

After finishing Amy & Roger's Epic Detour (click on the title for my spoiler-free review) I posted a picture on Instagram asking which book I should read next. While browsing Instagram I stumbled upon a picture from eunice.reads with a quote from Shadow and Bone and it got me really intrigued so I decided to pick that one up.

Last year I watched a BookTube video by Elisabeth Paige called 'As I read' and I thought it might be nice to do something similar while reading this book.

Be warned: this will be filled with spoilers so only read on if you've read this book!

I want to start by showing a couple of photos of things I really like about this book:


I love this cover and the font is gorgeous

And can we take a moment to appreciate my very appropriate - DIY - bookmark :-)

I'm 5 chapters in and at the moment I mostly have questions I would like to see answered!

* page 4: Who is the blonde man in purple and how is it that he knows that
Alina and Mal are eavesdropping?

* page 5: What are the Grisha exactly?

* page 7: I found it a bit confusing that there is a time lapse between the
prologue and the first chapter, but we don't actually know how much
time has passed. I also didn't know at first who was talking,
which was annoying.

* page 12: - I'm intrigued by the scar on Alina's right hand. Does it have
something to do with 'the gift she must unlock' (which is mentioned
in the synopsis)?

- Who is this Darkling? I've heard people on BookTube mentioning
him and the synopsis intrigued me...

* page 30: What's with this white light Alina has seen during the attack of the
volcra? (This was answered rather quickly)

* page 60: Who or what are the Fjerdan and why do they want Alina dead?

In chapter 5 we get to know a bit more about the Darkling: he's very old, yet looks very young. He's extremely powerful, yet feels the burden of his ancestors' actions. He appears to have a sense of humour.
Although Alina is completely overwhelmed, she is also not afraid to speak her mind. I like that in a character.

One last question: Why on earth does Alina need to lock her door at night while she is in the Little Palace???? (This warning is given at the very end of chapter 5)

I think it's safe to say that although I'm only 77 pages in I'm quite intrigued by the book and I definitely want to keep reading.

Let me know in the comments if you've read this book and what you thought of it, but please don't spoil it for me!!

Annelies
Posted by Liss' Little Bookcorner at 21:43 No comments:

Email ThisBlogThis!Share to TwitterShare to FacebookShare to Pinterest
Labels: As I read, Leigh Bardugo, Shadow and Bone

Summer has officially started - temperature wise, that is - so I decided to read a summery book.

If you want to know the synopsis click on the title above.

This was such a fun, quick and perfect summer read. I loved the fact that the book not only consists of the story but also has pictures of the places they've seen, receipts of things they've bought or eaten. All these things are gathered in a scrapbook, which is so cool. I also really liked the playlists that were added to the book. If you want you can listen to the songs while reading - not something I wanted to do, because I hardly ever listen to music while reading unless I'm on the train and it's really noisy.

Throughout the book we find out what happened in Amy's recent past through flashbacks and I really enjoyed that. You immediately know that Amy's father has recently passed away, but you only learn the how of it later on in the book.

Another positive thing about this book is that although the cover suggests otherwise, the story doesn't focus on the romance the whole time. It focuses more on the road trip and discovering oneself and all the emotions involved.
The relationships between Amy and her mother and Amy and her twin brother are also explored, which is nice.

SPOILER WARNING!! (You can highlight the next sentences if you want to read them)
I liked the fact that Roger has an ulterior motive at first and he actually admits it at one point. This makes the book more realistic and believable.

Unlike for some people, this book didn't make me want to go on a road trip, but that's probably because I'm not really the travelling type, so I won't hold that against it :-)

What I didn't like was the cover. When I bought this at Waterstones I was actually looking for the beautiful pink cover to match the blue cover of Second Chance Summer, but they only had the other cover :-(

I gave this 4.5 out of 5 stars. I deducted a 0.5 star because I wanted to read some more of their story after they arrived in Connecticut, maybe in an epilogue or so.

I couldn't have picked a better book to start my reading summer :-) I already have Second Chance Summer and Since You've Been Gone on my shelf, so I'm definitely going to read them soon!

Let me know in the comments if you've read this book and what you thought of it or if you're planning to read this.

My Summer break has started so I should have more time to blog!

I would like to start with my May and June book haul:

I ordered these books from bol.com in the month of May: 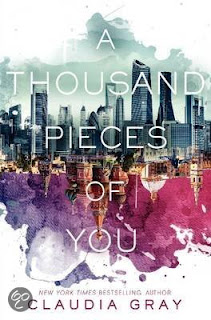 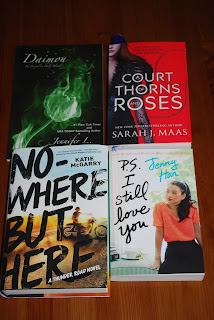 * A Thousand Pieces of You by Claudia Gray

* Daimon - the prequel to Half Blood by Jennifer L. Armentrout. I got Half Blood from Waterstones but I thought it would be best to have the prequel at hand :-)

* A Court of Thorns And Roses by Sarah J. Maas

* Nowhere But Here by Katie McGarry

These last three were my most anticipated Spring releases and I've read them already :-)

I got this next one from kobobooks.com 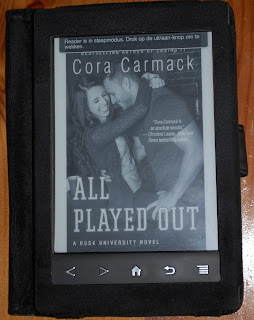 Since Cora Carmack is one my auto-buy authors, I pre-ordered this one so I could read it as soon as it came out :-)
In June I went to Waterstones again and I got some more books: 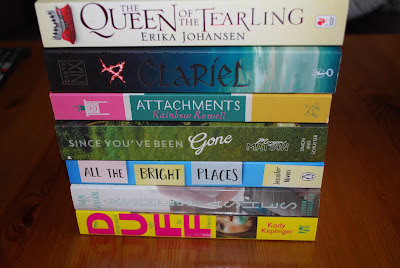 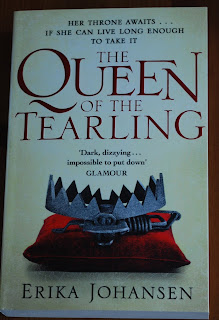 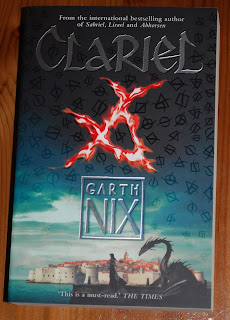 I read 'Sabriel, Lirael and Abhorsen' a couple of years ago in Dutch and I really liked them, so when I saw that there was a prequel I had to get it. 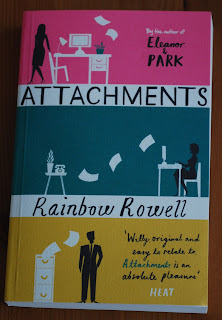 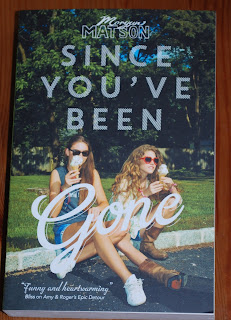 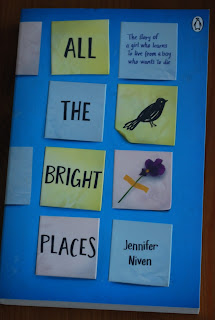 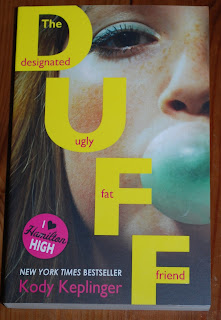 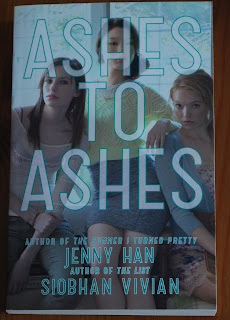 Let me know in the comments if you've read any of these books and what you thought of them. Which one should I pick up first?

Annelies
Posted by Liss' Little Bookcorner at 12:43 No comments: