This is my Friday reads post for the upcoming weekend and week.
First a little update from last week.
I was able to finish two books:
1. Snow Like Ashes by Sara Raasch. I gave this book 4.5 stars and so I was able to use the patterned paper to make my first star for the star jar. I'm going to write a review for this book, so keep your eyes out for that.

2. Fuel the Fire by Becca & Krista Ritchie. I've started the year well - I know I started this book in 2015, but still - because I gave this one 5 stars. It's also the first book in the series that gets 5 stars. The characters have grown so much over the course of all the books. I haven't started 'Long Way Down' yet, because I want to savour it. But since it has over 500 pages, it'll take me some time to get through anyway. Not that I mind, though ;-)

I continued listening to another hour and fifteen minutes of 'Scarlet' by Marissa Meyer while taking down the Christmas tree and decorations. I'll be listening to more of this during the upcoming week.

I haven't read any more from 'Prince of Thornes' by Mark Lawrence. To be honest, I haven't really been in the mood to pick this one up. Maybe I'll read some more of this tonight.

This week I've started proof-reading Bre Faucheux' new fantasy book. I'm about 30 pages in and I'm really enjoying it. I'm hoping to get a good chunck of this read next week.

If I feel like it, I might start 'Let it snow' by John Green, Maureen Johnson and Lauren Myracle. I know this is a Christmassy type of story, but since we finally had some cold weather last week, I thought I might pick it up. If I don't feel like picking this up, I might start 'Red Queen' by Victoria Aveyard.

Let me know in the comments what you'll be reading during the weekend and the upcoming week.

Annelies
Posted by Liss' Little Bookcorner at 21:05 No comments:

This is my collective July 'till December bookhaul: 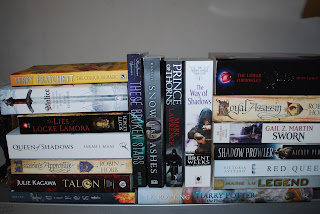 *July
- When you're back - Abbi Glines
- Every last breath - Jennifer L. Armentrout
These are both e-books
*August
- Malice - John Gwynne
- The colour of Magic - Terry Pretchett
*September
- Queen of Shadows - Sarah J. Maas
- Assassin's Apprentice - Robin Hobb
- The Lies of Locke Lamora - Scott Lynch
*October
- Fairest - Marissa Meyer
- Talon - Julie Kagawa. I bought this one in preparation for the 'Antwerp bookfair' because I wanted to get it signed by Julie Kagawa. 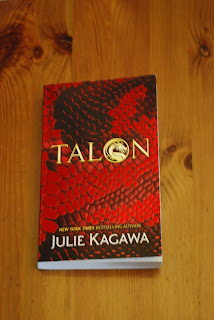 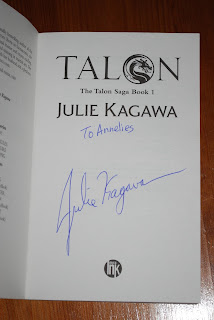 These are the books I got at the 'Antwerp bookfair':
- Snow Like Ashes - Sara Raasch
- These Broken Stars - Amie Kaufman & Meagan Spooner 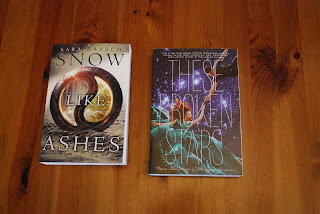 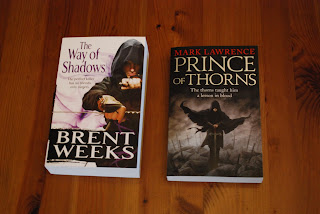 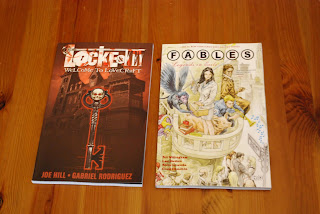 - Inkt, zweet en tranen - Marec. He's a Belgian cartoonist. I bought this one for my boyfriend and I had it signed. 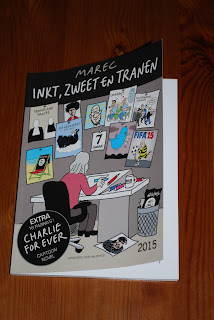 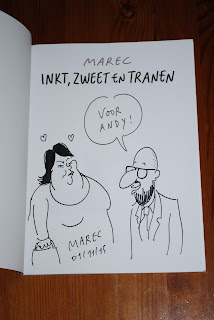 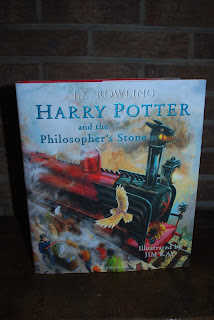 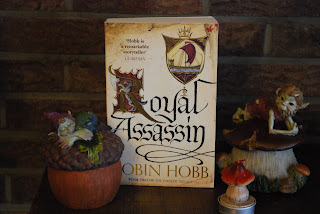 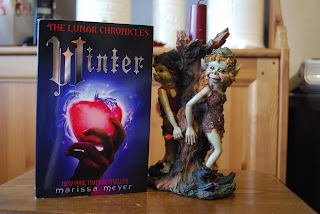 *December
At the beginning of December I went to 'Boekenfestijn' which is a bookfair where you can get fairly cheap books.
- The sworn - Gail Z. Martin
- Shadow prowler - Alexey Pehov

While I was in Ghent I went to a bookstore there and got:
- Red Queen - Victoria Aveyard
- Legend - Marie Lu
Have you read any of these books? What did you think of them?
Bye for now
Annelies
Posted by Liss' Little Bookcorner at 22:19 No comments:

This is a quick post to let you know what I'll be reading during the weekend and the upcoming week.

I'm currently reading four books, although one hasn't been getting as much attention as the other three. 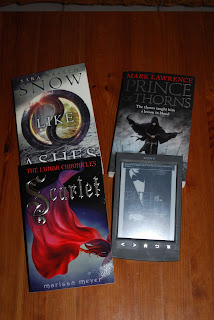 1. Snow Like Ashes by Sara Raasch. I'm currently on page 389 of 416, so I think I will be able to finish this tonight or this weekend at least. I'm really loving this story and I will definitely be continuing the series.
2. Fuel the Fire by Krista & Becca Ritchie. I'm on page 391 of 476. Since I'm mainly reading this one while travelling to and from work, the reading is going somewhat slower than I'm used to with these books. But since this the last but one book in the series - I know, there is still an extended epilogue coming out as well - I want to savour it as long as possible.

3. Scarlet by Marissa Meyer. I'm reading this as an audiobook. This is the first time I'm listening to an audiobook while doing chores and I have to say I'm quite enjoying this. This is a reread for me and I still love it just as much as I did the first time I read it. I'm hoping to get through a big chunck of it next week. I've listened to about 3hrs of it, I have about 8hrs left.

And last but not least - well maybe a bit at the moment:

4. Prince of Thorns by Mark Lawrence. It took me quite some time to get into this book and I decided to apply the 100 page rule: If I don't like the book by the time I reach page 100, I put it down. I'm on page 90 and I'm finally getting into to the story. I hope I can read some more of it during the upcoming week.
With the exception of Scarlet, I started these books in December, so I'm hoping to finish at least one or two in the upcoming weeks.

What are you currently reading? Have you read any of these books and what did you think of them? Let me know in the comments.
Bye for now
Annelies
Posted by Liss' Little Bookcorner at 21:27 No comments:

Today I want to talk about a little project I'm going to start: a star jar.

I got this idea from Sam from Thoughts on Tomes. You should really check out her channel :-) At the beginning of 2015 she made a video in which she talks about making a star jar and I like it so much that I want to try it for myself.

The idea is that you make an origami star for every book you've read. You choose a different colour for each genre and a patterned paper for a five star read. That way you can more or less keep track of how many books you've read, which genre you've read the most from and how many books you rated 5 star. I'm not sure how that will work out for me, because I hardly ever give a book 5 stars. So, I'm going to use a different pattern for my 4.5 star reads as well. 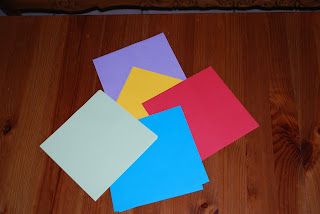 I know NA is not a genre, but I wanted to include it anyway. 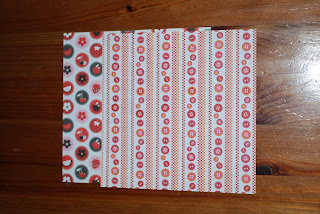 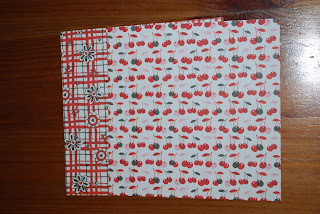 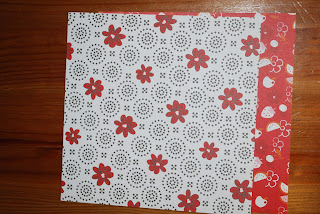 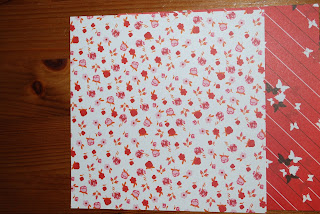 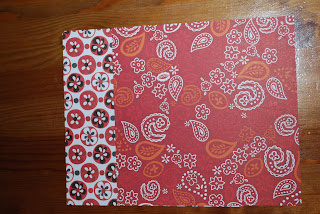 Fingers crossed that by the end of the year I will have a jar filled with a variety of coloured stars and hopefully there will be some patterned ones too.
Thank you, Sam, for such a lovely idea!
How do you keep track of the books you've read? Let me know in the comments.
Bye for now
Annelies
P.S.: Here's the link to a YouTube video on how to make the origami stars. 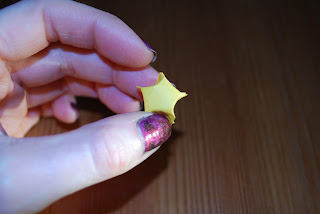 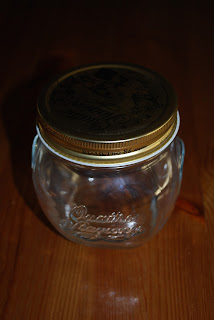 Posted by Liss' Little Bookcorner at 22:22 No comments:

I said in my last post that I wasn't going to set myself any goals this year, but that I might put together a list of books I would like to get to this year.

So here goes.
Just a little disclaimer, this list is in no particular order and with the exception of two they are not 2016 releases.
A) Books I already own:
* Fairest and Winter by Marissa Meyer
* Royal Assassin by Robin Hobb
* Bloodlines by Richelle Mead
* Red Queen by Victoria Aveyard
* Legend by Marie Lu
* Queen of Shadows by Sarah J. Maas
* A Storm of Swords (GOT 3) by George R.R. Martin
* The eye of the world (The Wheel of Time 1) by Robert Jordan (This is actually a reread, but it's been so long since I've read them the first time.)
* The Lies of Locke Lamore by Scott Lynch
* The colour of magic (Discworld 1) by Terry Pratchett
* A Trudi Canavan book - either The Magician's Apprentice or Priestess of the White, I'm not sure yet.
* The Elfstones of Shannara (book 2 of the original Shannara trilogy) by Terry Brooks
* These Broken Stars by Amie Kaufman & Meagan Spooner
B) Books I don't own yet:
* Siege & Storm, Ruin & Rising and Six of Crows by Leigh Bardugo
* Stars Above and Heartless by Marissa Meyer
* Frozen Tides by Morgan Rhodes
Have you read any of these books? Let me know in the comments which one I should read first.
Bye for now
Annelies
Posted by Liss' Little Bookcorner at 22:34 No comments:

Email ThisBlogThis!Share to TwitterShare to FacebookShare to Pinterest
Labels: 2016, TBR

At the beginning of 2015 I wrote a blogpost about my bookish goals and now I want to take a look at the things I accomplished - or failed at :-s

#1 Goodreads goal => read 50 books => Check = I've read 54 books (actually 58, but again, rereads).
#2 Read a classic => I mostly failed this goal, because I haven't read a single classic. But I did read the graphic novel of 'Sense & Sensibility' by Marvel. I know, this is technically cheating, but hey!

#4 Continue/finish some series: I'm dividing this into different 'categories'.

* The Mortal Instruments and the Infernal Devices by Cassandra Clare.
* The Cousin's War and the Tudor Court series by Phillipa Gregory.
* The Wheel of Time by Robert Jordan.
* The Death Gate Cycle by Margaret Weis and Tracy Hickman.
* The Inheritence Cycle by Christopher Paolini.
* The Lord of the Rings by J.R.R. Tolkien.
* Game of Thrones by George R.R. Martin.
* The Shannara series by Terry Brooks.
b) Continued:

* Throne of Glass by Sarah J. Maas: I've read Heir of Fire, but not Queen of Shadows, but I'm still counting it as continued.
* The Lunar Chronicles by Marissa Meyer: Hmm, I haven't read Winter yet, but I have reread Cinder. Does this count as continueing? ;-)
* The Falling Kingdoms series by Morgan Rhodes: I finished Falling Kingdoms and read Rebel Spring and Gathering Darkness, but not Frozen Tides.
c) Unhauled:

* The Fallen series by Lauren Kate.
* The Dwarves by Markus Heitz.
d) Finished:
* The His Fair Assassin's trilogy by Robin LaFevers.

#5 Buy less books than in 2014 => Let's just say I failed this goal too, but only slightly. I've bought less physical books, but more e-books.

Did you set yourself any goals for 2015 and how did you fare? Are you setting yourself goals for 2016? Let me know in the comments. 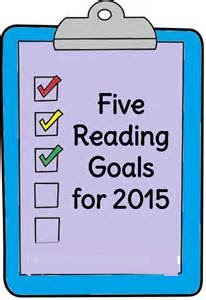 Posted by Liss' Little Bookcorner at 22:16 No comments:

Email ThisBlogThis!Share to TwitterShare to FacebookShare to Pinterest
Labels: 2015, in review, reading goals

I would like to start by wishing you all Happy New Year and a wonderful 2016 filled with love, luck, good health and many, many books :-)

I started this bookblog on January 1st 2014 and I have to say I've enjoyed blogging very much. I have to admit that it's a lot more intense and time consuming than I anticipated, but I love it nonetheless.

I've learned so much about reading - different genres, getting out of my comfort zone, reading multiple books at once - and reviewing.
Blogging, watching BookTube and being on Bookstagram has given me the opportunity to 'meet' new people who share my love of books and reading.

Thank you very much to all of you who are following this blog or to those who are just sporadically reading my posts! On to a new year filled with lots and lots of books :-) 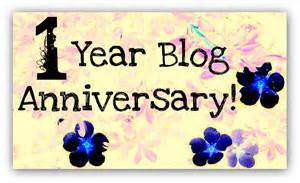 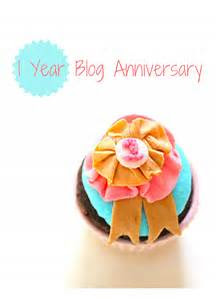 I'll have that cupcake now, thank you ;-)
Posted by Liss' Little Bookcorner at 17:50 No comments:

Anticipated releases of 2016 - I've read books from this authors and new authors.

Part three of my anticipated releases.

E) Authors that are new to me:

This isn't the final cover

Are there any other books you are excited for? Let me know in the comments.

Annelies
Posted by Liss' Little Bookcorner at 19:06 No comments: