Very long time no see, it's been almost three months since I last wrote a post. I just haven't felt like posting anything lately... I'm going to give it one more try, I guess and see where it leads me. I want to write more reviews, but they are so time-consuming and school has been really hectic with all the changes there have been.

Anyway, I thought of doing a top 10 of 2019 but when I started looking at my GR list of read books, I had a hard time narrowing it down to 10 books. So, instead of a top 10, I'm going to list my 4, 4.5 and 5 star reads of this year.
These books are in no particular order and they weren't necessarily published in 2019.
*Shadowblack (Spellinslinger #2) by Sebastien de Castell 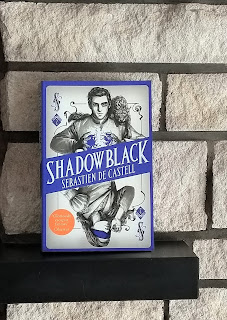 I reread Spellslinger so I could read this one (even though I'd only read it back in April), because I wasn't totally invested in the story the first time I read it. After having enjoyed it a lot more the second time around I didn't wait very long to read Shadowblack. I really liked this one and I already have book three Charmcaster on hand.
*The Black Prism (Lightbringer #1) and The Broken Eye (Lightbringer #3) by Brent Weeks 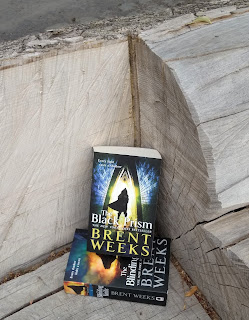 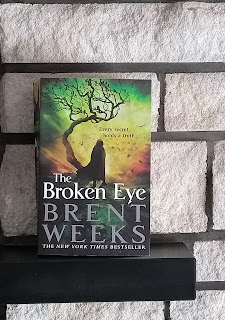 I have been meaning to read a Brent Weeks book for a while now. I've had the first book in his Night Angels trilogy on my TBR for years. But I decided to try his Lightbringer series first.
So far, I've read three out of the five books in this series and even though I'm sometimes confused when reading them I'm really enjoying them as well.
*The Alloy of Law (Mistborn #4) and The Bands of Mourning (Mistborn #6) by Brandon Sanderson 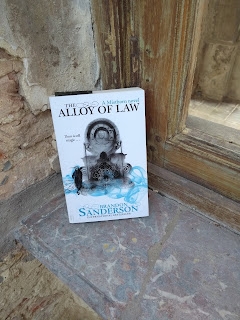 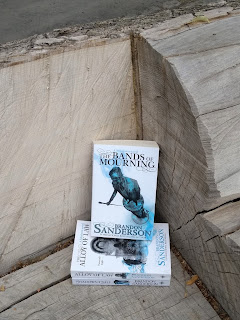 I really love the Mistborn Era 1 trilogy and was really curious to read the Era 2 books. They aren't as good as the original trilogy, but I still enjoyed being back in this world. And the humour is again very good. I thought this was a trilogy, but apparently, a fourth book has been announced.
*Malice (The Faithful and the Fallen #1) by John Gwynne 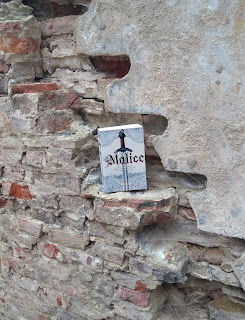 This is another one that I've had on my TBR for ages. I started it a couple of years ago, but I couldn't really get into it (I don't have the audiobook for this one, so it was taking me ages to make any progress) but in August I decided to give it another try. And I'm so happy that I did. I even went and bought the rest of the series after finishing this one. Malice is perfect for fans of the more classic fantasy writing style.
These were all the fantasy books that were 4 star reads.
The other two 4 star reads were an adult dystopian and a New Adult contemporary:

*The Handmaid's Tale by Margaret Atwood 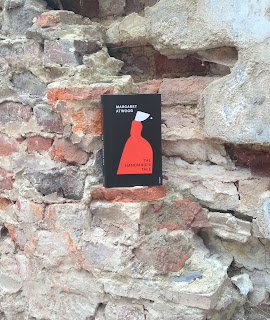 I watched the first two seasons of the TV-show before reading this so I had some idea of the bleakness of the story being told here, but wow, the book painted an ever bleaker version of that possible future. I'll be picking up The Testaments when it's released in paperback.
*Him by Elle Kennedy and Sarina Bowen 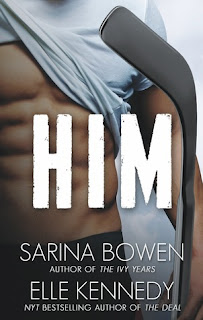 I've read quite a few books by Elle Kennedy, but I hadn't read anything that she co-wrote with Sarina Bowen yet. This is also only the second M/M romance that I've read and I have to admit I liked it a lot. My biggest fear when reading M/M romance is that it will be cringe-worthy, but that's definitely not the case in this story. I'm definitely going to pick up the sequel at some point.
What were some of your 4 star reads this year? Let me know in the comments.
Bye for now
Annelies
Posted by Liss' Little Bookcorner at 23:22